For my report on extension performance I first needed a list of Chrome extensions. This post takes a deeper look at the full list, looking at the most popular extensions, extension ratings, paid extensions, and top extension authors.

I also put the full list Chrome extensions I found on GitHub.

How many Chrome extensions are there?​

This result broadly matches those by Extension Monitor from August 2019 where they found 188,620 items. Note that their analysis also included Chrome Apps, which Google has since announced they are ending support for.

Also, keep in mind that extension publishers have incentices to game install counts and ratings. 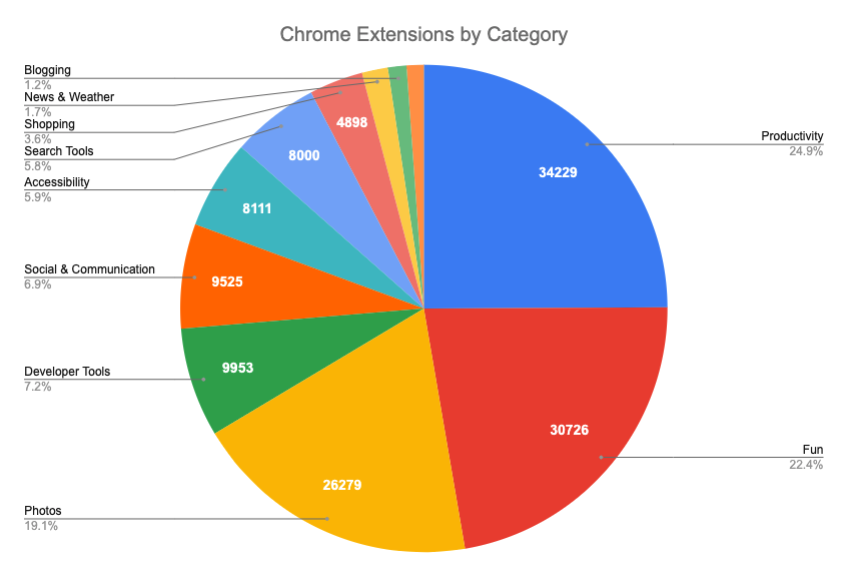 What are the most popular Chrome extensions?​

This table shows the 20 most popular Chrome extensions. 17 of them have been installed more than 10 million times.

Next, lets look at developer tools.

TouchEn PC isn't really a developer tool, but an extensions required by some Korean banks and other institutions. CryptoPro is similar, a review mentions "tax inspection" making them use it.

70% of Chrome extensions have fewer than 100 users, but together they only make up less than 0.1% of installs.

The median install count is 17, on average each extension has 12,304 users. 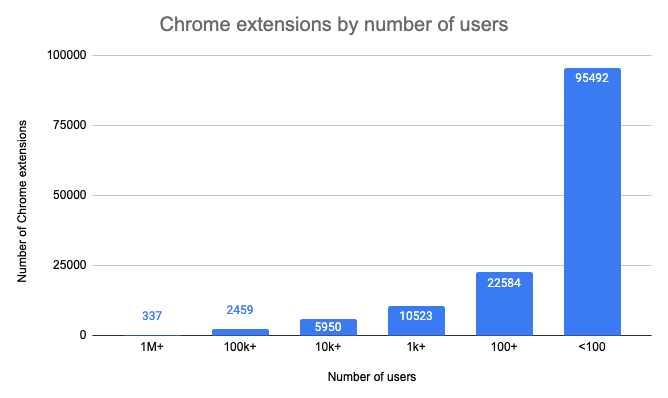 In total I'm counting a minimum of 1.69 billion installs. The real number is higher, since the Chrome Web Store doesn't provide precise numbers. Especially in the "1M+" bucket a lot of installs aren't counted since the displayed install count is capped at "10M+" 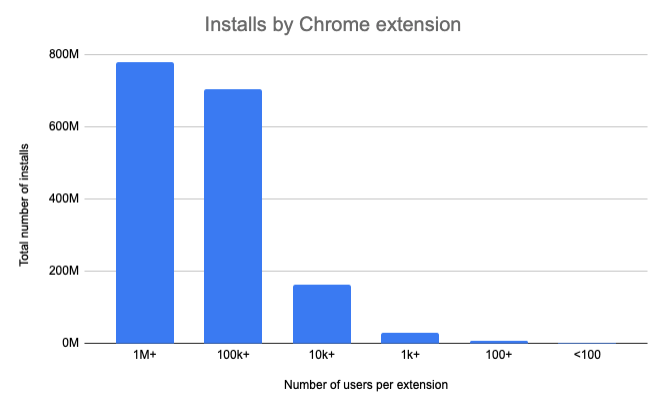 Here I'm only including extensions with at least 10 ratings. The median overall rating is 4.4, the average is 4.1. 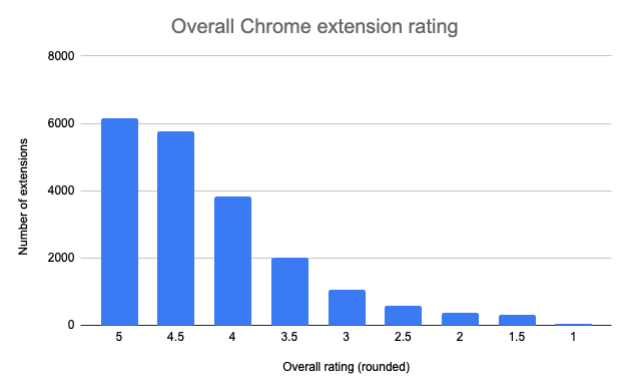 The median rating doesn't vary much by category, it's a bit over 4 but almost 5 for the Photos category.

The ratio of installs to ratings is about 140, so 1000 installs will result in 7 ratings. I'm fairly uncertain about the accuracy of this, especially since Chrome doesn't report precise install counts. 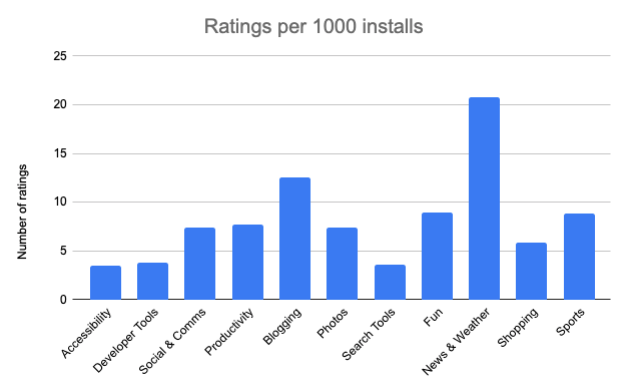 4.7% of extensions support some kind of payment, mostly as a one-off purchase rather than as a subscription. 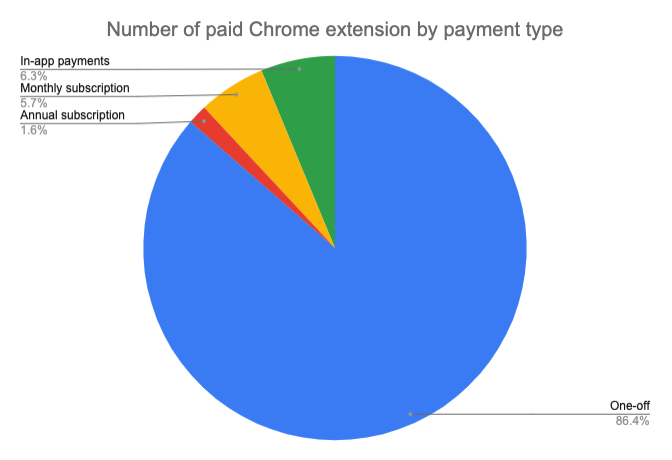 In most categories 1-3% of extensions are paid. The Fun category is a clear outlier here, with 15% paid extensions. 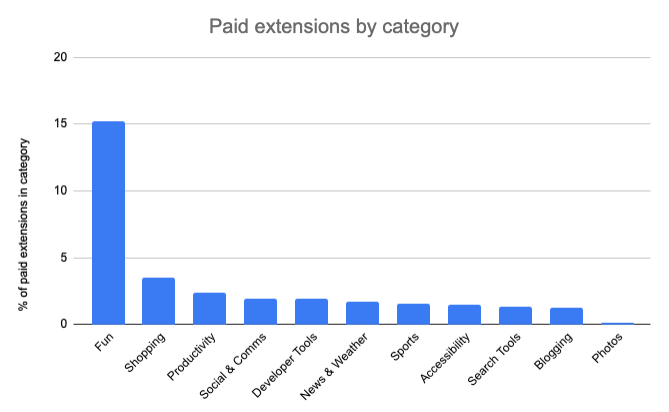 The most expensive extensions tend to be Chinese, with a \$500 Tmall store tool topping the list.

Looking only at English-language extensions, someone is trying to sell a snake game for $299. The most expensive extension with actual users is SquarespaceWebsites Tools PRO, which costs $199 and reports 358 installs. 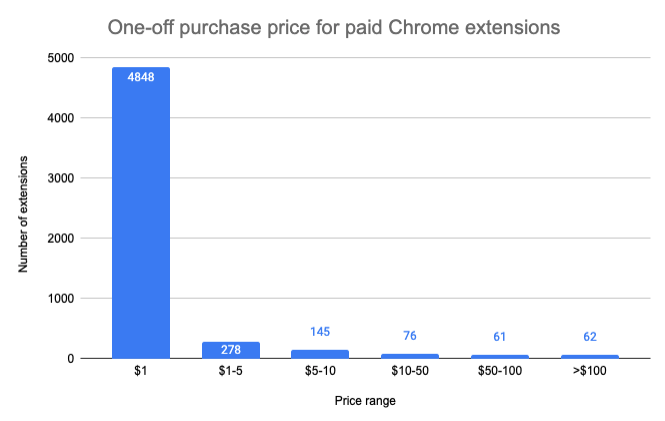 Outside the Fun category extension prices tend to be higher than \$0.99. 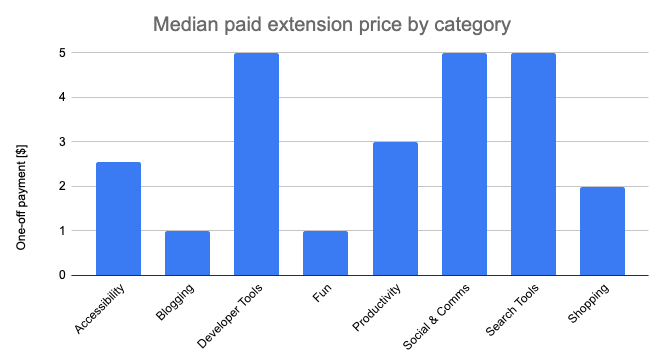 I've excluded the News & Weather category here, where the median price is \$110. It contains a bunch of extensions like "Weather Meter" and "Climate of Antarctica" with no information about what the extension does. The description is copied from Wikipedia, and the extension image is a generic weather-related landscape picture. 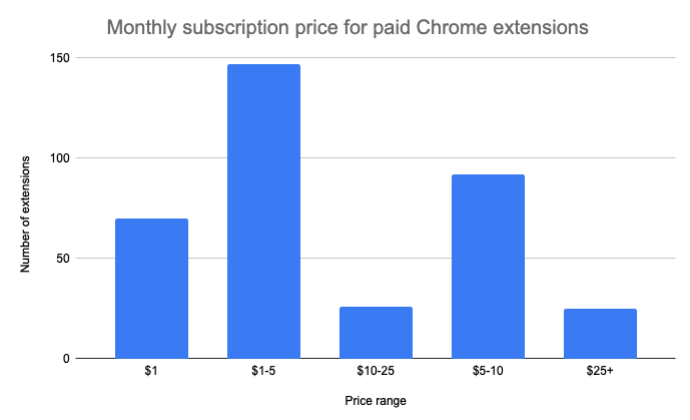 What Chrome extension makes the most money?​

This is hard to answer:

But anyway, here's a table showing the top extensions based on made-up revenue figure. I multiplied the one-off price or per-year subscription cost by the number of installs.

Please don't take these figures too seriously! They may well be off by an order of magnitude.

To further discredit the numbers here, two of the supposedly top earning extensions are no longer in the Chrome Web Store. Open SEO Stats supposedly had 100k users, at a price of $3.99/mo. Another extension, SpeechNotesX, would also have been listed with a revenue of $791k. The original extension doesn't exist any more, but now there's a SpeechNotes extension for \$5.99/mo with 2000 users. 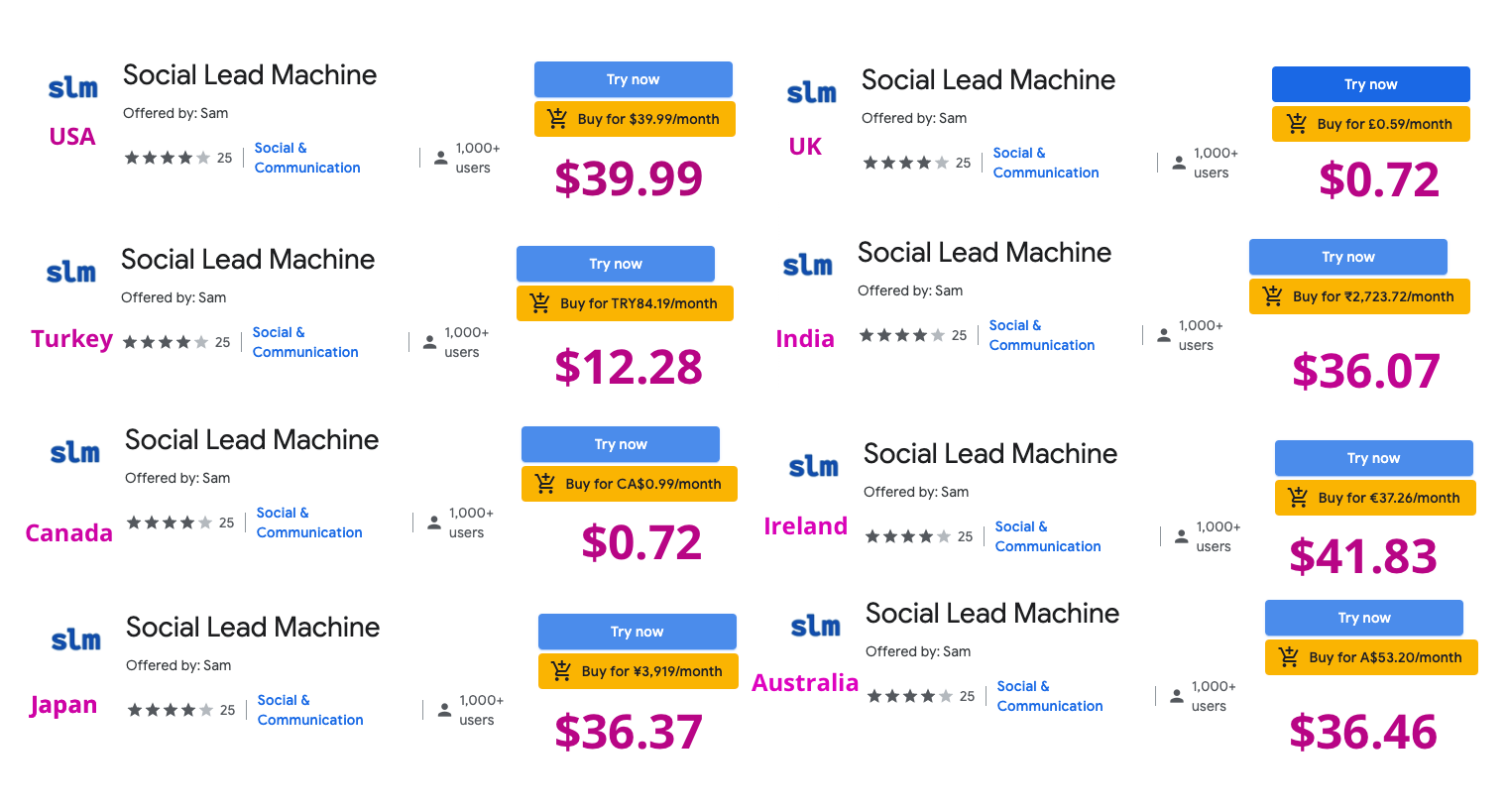 Here are the top authors by the number of published extensions. Many of their extensions only change the New Tab page.

And here are the top authors by total number of installs.

This measures how much disk space the extension code uses – excluding extension data. I only have this data for roughly the top 1000 extensions.

In most cases the folder takes up less than 30MB, but in the case of ClaroRead it goes up to 130MB. 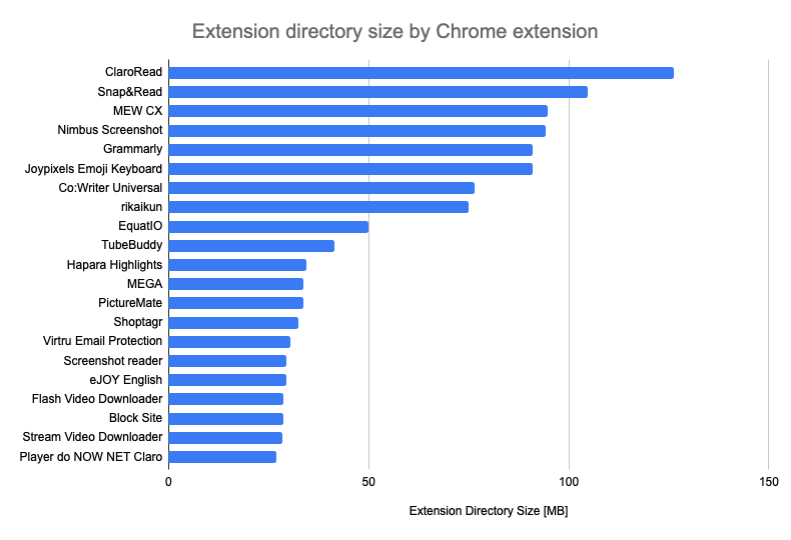 Extensions have a manifest that defines what permissions are required. For example, the tabs permission allows an extension to see what tabs are currently open.

Again I only have data on the most popular extensions. I excluded extensions that only change the New Tab background – this biases the sample, since these simple extensions presumably need fewer permissions.

I also counted URL permissions like https://*/* as <all_urls>. 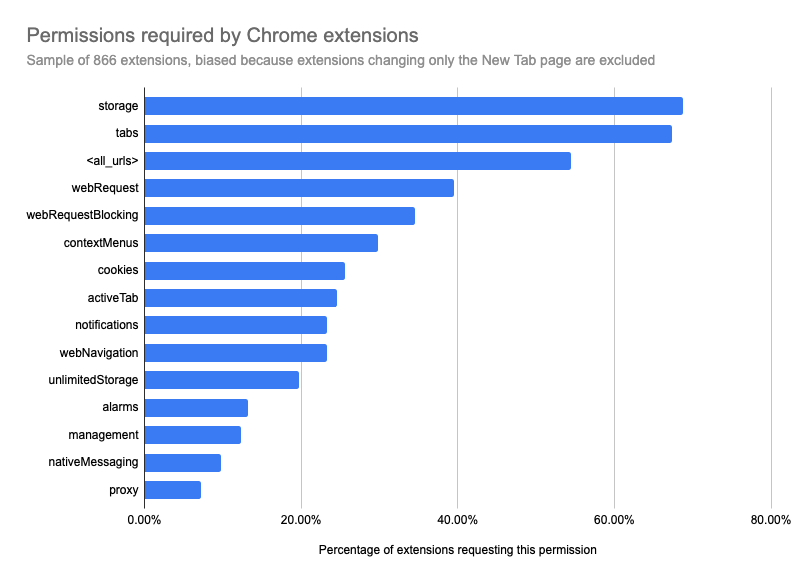 I originally collected this data in May 2020, but noticed that some extensions have since been removed or saw a big drop in install counts.

What's causing this? I think in part publishers are gaming the number of installs. For example, I found two extensions with the same code that have now been removed. One had its install count drop from 2M to 20k. The other was less than a week old, had 1M installs, and no ratings. I'm not sure what the goal was here – maybe get a lot of users and then upload a new version of the extension that's malware?

That said, extensions being removed is not always due to fraud. Publishers may remove extensions just because they don't support them any more. The Chrome Web Store also recently deleted one of my extension that I hadn't updated for a while, presumably because it stopped working.