Fade-in animations make a website look more polished, but can also cause a slower Largest Contentful Paint. That's because of how elements with an opacity of 0 are counted when measuring LCP.

This article explains why fade-in animations can delay LCP and what you can do about it. 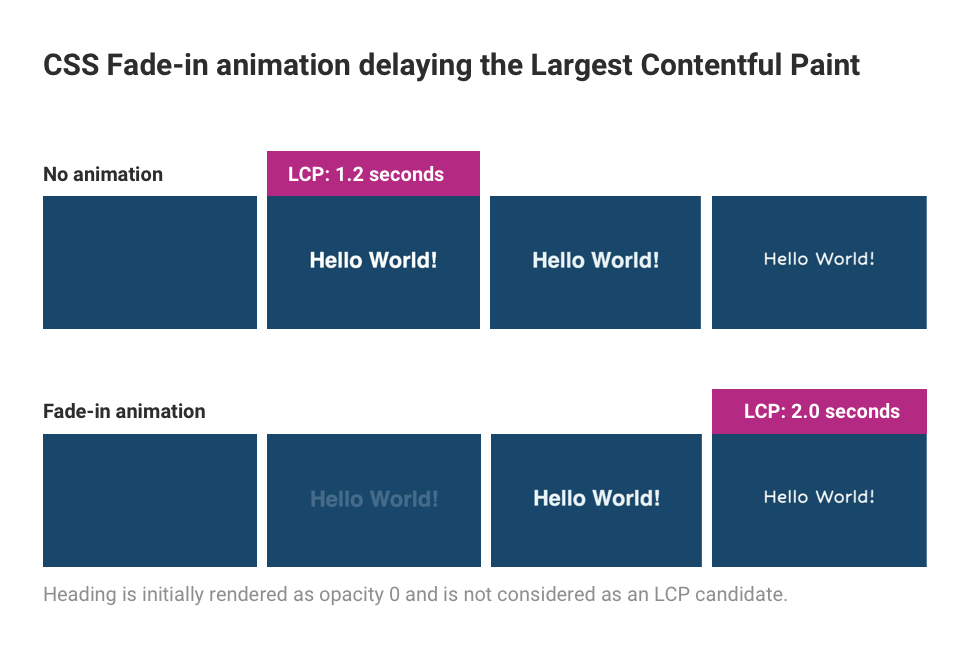 Elements with an opacity of 0 are not LCP candidates​

The Core Web Vitals measure user experience, so counting a paint with opacity 0 as the LCP element doesn't make sense.

Accordingly, in August 2020 Chrome made a change to ignore these elements.

[LCP] Ignore paints with opacity 0
This changes the opacity 0 paints that are ignored by the LCP algorithm. [...] After this change, even will-change opacity paints are ignored, which could result in elements not becoming candidates because they are never repainted. In the special case where documentElement changes its opacity, we consider the largest content that becomes visible as a valid LCP candidate.

Note the special case for documentElement. Many A/B testing tools initially hide all page content, so without this exception no element would ever be counted for LCP.

If there's no repaint then another page element will simply be used to measure the LCP. However, your the LCP can increase if a large element repaints and becomes the new LCP element.

What might cause an element to repaint? A few examples:

This is what was happening on the website where I first noticed this issue:

The H1 was registered as the LCP element in the last step, even though no visual change occurred at that point.

Let's look at a page where the LCP element is the H1 element and that uses a web font.

Without an animation the LCP is registered when the heading is first rendered. When the web font is loaded later on it doesn't cause the LCP to update.

Then we'll add a CSS fade-in animation to the H1, starting at opacity 0.

With the animation, no LCP is registered for the initial render as the element starts with an opacity of 0. The LCP doesn't update when the fade-in animation completes, but it is updated when the web font load causes a repaint.

How to fix this LCP issue​

Disabling the animation would be the easiest fix.

You could also start the fade-in animation with a non-zero opacity like 0.1, to ensure the initial render counts as an LCP candidate.

This doesn't seem to apply to images​

For both text and images, the LCP is reported when the content is repainted. However, it appears that for images the startTime reported by Chrome shows when the element was originally rendered, rather than the most recent update.

Compare this to a text node that's faded in, followed by resizing the browser to trigger a repaint.