Network throttling can simulate how users on a slow connection would experience loading a website. There are different ways to simulate a slower connection, and you'll see different results depending on which one you use.

You've probably seen the throttling settings in Chrome DevTools. They add a browser-level delay when the response is received.

Lighthouse doesn't actually use a throttled connection when loading the page. Instead it simulates how the page would have loaded on a slower connection.

Netem is an OS-level network throttling tool for Linux. There are cross-platform wrappers around it, for example comcast.

Here are the timing results for a website with just a single document request. For each tool I specified a round-trip latency of 150ms and a bandwidth of 1638kbps. 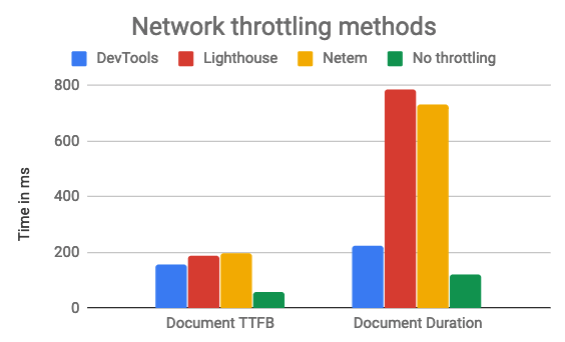 The time to first byte (TTFB) is the time it takes for the client to receive a response after sending a request. That's one network round-trip plus how long the server took to generate the response.

If we assume the server takes 30ms to respond then we would expect a TTFB of 180ms. And that's pretty much matches what we see.

However the full request duration varies a lot by throttling method. My HTML document is really small, so the variation is not because of the time it takes to download the document. Instead there are additional round-trips for DNS resolution and establishing a connection to the server.

You can see that DevTools only delays when the server response is received, rather than simulating each round-trip. (Which is why when running Lighthouse with --throttling-method=devtools it actually simulates a higher latency than normal to even out the differences.) 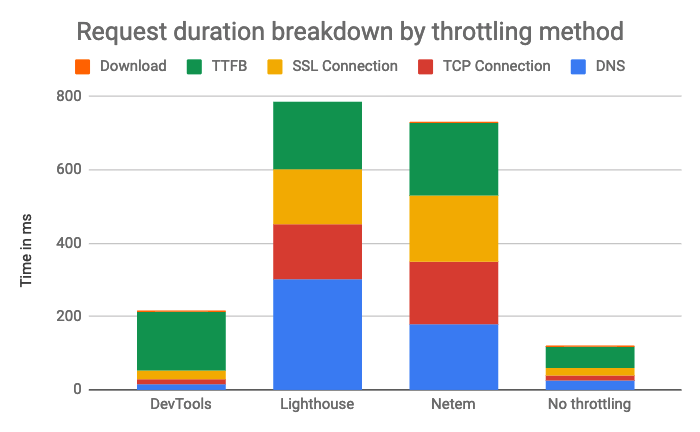 Both Lighthouse and Netem throttle round-trips for DNS resolution as well as establishing TCP and SSL connections.

Lighthouse always simulates two round-trips to resolve the domain name, but in this case only one was necessary.

Netem adds the round-trip time to the actual time taken for the network transfer, so e.g. establishing the TCP connection takes 180ms instead of 150ms.

Example 2: Adding a second request to the same domain

Let's add a small CSS file to the page:

The timing differences between the different tools are much lower than before. Once the connection is established we just need a single round-trip for the HTTP request.

What’s up with Lighthouse when using HTTP/2 though? HTTP/2 brings down the cost per additional request because the browser can make multiple requests simultaneously on the same connection. On a page with many requests that means that the time spent sending the request is negligible compared to the download time.

Because of this, Lighthouse doesn't simulate an additional roundtrip for each request. However, in this case we only have one extra request and Lighthouse is underestimating the cost.

While Lighthouse is overly optimistic about the cost of HTTP/2 requests, DevTools is overly pessimistic and adds the round-trip delay even when a round-trip isn’t necessary. Netem will be most accurate in this case.

What do the TTFB numbers look like if the server waits for a second before sending the response to one of the requests? 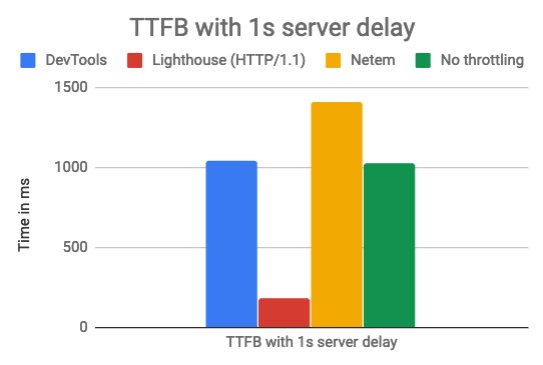 If the round-trip time is 150ms and the server takes 1s to respond we'd expect a TTFB of 1.15s under ideal network conditions.

You can see that Netem adds the delay on top of the server response time, while DevTools doesn’t add an extra delay if the specified latency is already met.

So even though the server waits 1s before finishing the slow requests, Lighthouse uses a TTFB of 190ms (150ms roundtrip + 40ms server delay).

No website would be complete without a 4MB JavaScript bundle! 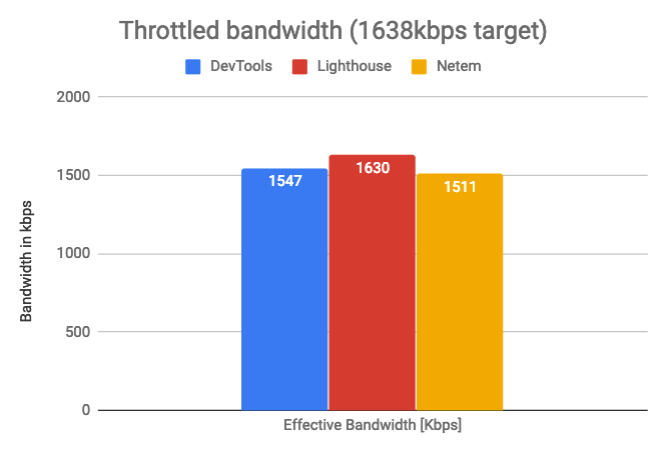 There's not a huge amount of variation here between the different throttling methods.

Lighthouse is closest to the specified bandwidth. The first and last downloaded chunks are smaller than the maximum size, which explains the small difference.

Netem presumably encounters some additional delay from the real network. With DevTools I'm not quite sure why it isn't closer to the specified value.

The different throttling methods optimize for different use cases.

DevTools is interactive, easy to use, and pretty accurate. It's less accurate if your page is constrained by backend response times or if you are connecting to lots of different servers.

Netem best preserves real network characteristics, but it needs to run as admin and will throttle the network for your entire computer. Not covering up real network conditions is great for realism, but less great for variance when loading a page multiple times.

DevTools and Lighthouse make it easy to get an overall picture of the speed of a web page. If your page load times depend a lot on how fast your API responses are, either use a network-level throttling tool or no throttling at all.

I wrote a detailed explanation of how the Lighthouse throttling simulation works for the 2021 PerfPlanet Calendar.