The web is best experienced with a fast network connection. Still, a large number of people will visit your site using slower speeds. They might visit your page while on the road or in a remote place.

The Chrome DevTools network throttling feature lets you imitate degraded network conditions. In this article you will learn how to use it and how exactly it works.

In order to throttle the network, first open Chrome DevTools.

Now you can observe the website being loaded on a slow connection. Check the example below to better understand how to use this tool.

When network throttling or the local overrides feature feature are enabled, DevTools shows a warning triangle next to the Network tab title. In this case there's a "network throttling is enabled" tooltip that tells you Chrome is interfering with the normal network behavior on the current page.

Let’s dive deeper into what they mean and when to use them.

Chrome DevTools uses a request-level throttling approach. A delay is only applied once the server response is received.

Request-level throttling does not consider individual network round trips like DNS resolution and establishing TCP/SSL connections.

We'll discuss request-level throttling in more depth further down in this article.

Due to the way DevTools throttling is implemented the latency values tend to be higher than what other tools use. However, they are selected in order to achieve a roughly equivalent slowdown.

Latency measures the time it takes for data to pass from one point on a network to another. It’s most important in applications where the duration of a back and forth response is important. For example: collaboration tools, chats and multiplayer games.

Latency can also make a big difference when loading a page using resources from different servers. When sending requests to multiple servers, a connection needs to be established to each server. How long this takes depends greatly on network latency.

The request waterfall shows how time is spent establishing connections to different servers.

Bandwidth is a measure of the capacity of a given network. It tells you how much data you can transfer in a given amount of time.

Mbps stands for megabits per second and is a unit used to measure bandwidth. On a 1 Mbps connection you can download 125 kilobytes per second.

What throttling setting should I use?​

Use the Fast 3G setting to check your website’s performance on a decent mobile connection. Fast 3G also aims to match the mobile throttling used by Google's Lighthouse tool, so you can use it to compare your metrics to those collected by Lighthouse and the PageSpeed Insights lab data.

Slow 3G setting is a good choice when you want to optimize your website’s loading speed. It allows you to clearly see which elements load first. Using this setting lets you work on making the loading experience much smoother.

DevTools also supports creating custom network configurations where you can choose the bandwidth and latency. For example, you could create a configuration that matches a typical customer.

You can now select your own profile from the throttling dropdown.

Many websites are interactive and can make requests for additional resources after the initial page load. Select the Offline profile to see what will happen when the internet goes down. It can be used to see if your site handles network errors properly.

The video below shows an example of offline mode in Google Translate.

You also might support offline functionality on your website by using a Service Worker. If that’s the case then DevTool gives you the ability to test it properly. Below you can see an example of Twitter in offline mode.

The browser sends a request as usual. Once it receives a response it adds a delay until a minimum response time is reached.

We created a test website that sends three small requests with a server response time of 0ms (instant response), 500 ms and 1 second.

When no throttling is applied the responses arrive with minimal delay. Around 20ms is added to the server response time due to time spent on the network.

When using the Fast 3G option the requests have a minimum server response time applied to them, in this case around 550 milliseconds. The longest request doesn't take longer than before.

When we use the Slow 3G setting, all requests take equally long to complete, around 2 seconds.

Testing your site with request-level throttling can lead to lower metric accuracy, as the underlying differences in response time are hidden.

Real world example with TCP and SSL round trips​

When first connecting to a site the browser needs to look up DNS records and then establish TCP and SSL connections. Only after that can it send the actual HTTP request.

These network round trips are only needed for the initial request to the server. Subsequent requests simply reuse the existing server connection, requiring only one round trip for the HTTP request (and possibly more to download the response).

DevTools doesn’t slow down all of those steps, it simply applies a minimum delay to the server response time. To make up for it, the delay is extended by a certain factor, defined by Chrome.

This works well for the first request due to the adjustment factor / equivalency mentioned in the tables above. But it also slows down subsequent requests disproportionately, making them slower than they would be in reality.

In the waterfall below, the first request includes the steps needed to establish the connection. All the requests after that are faster, since they can simply use the already established channel.

Let’s take a note of the fact that establishing the TCP and SSL connections takes 668 milliseconds. 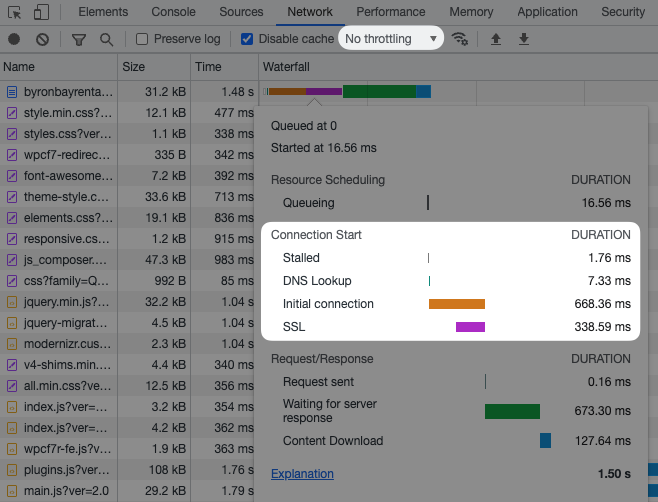 After enabling throttling, establishing the connection takes 695 milliseconds. This is basically the same as the unthrottled request. We can tell that Chrome is not slowing down the network at this stage. 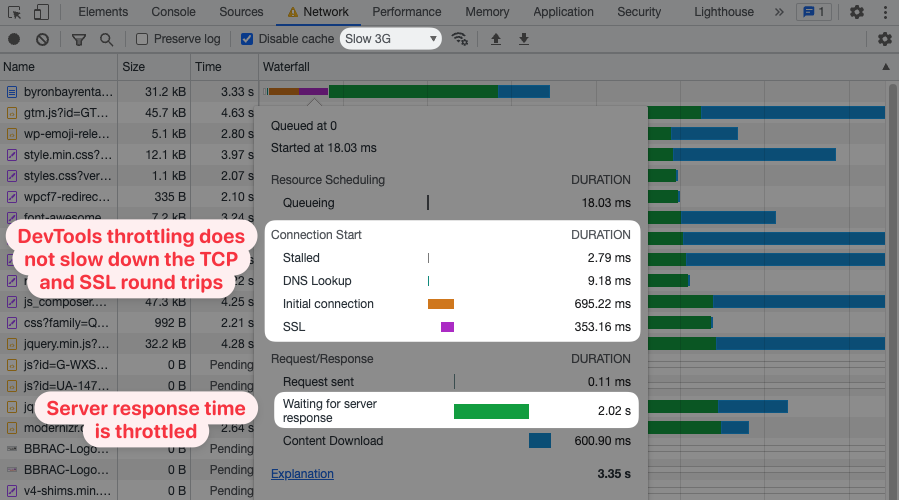 The server response time (TTFB) time is increased to 2 seconds.

This large increase in latency is applied to all requests on the page, not just the initial request that consists of multiple network round trips.

The throttling method used by Chrome’s DevTools is only an approximation of an actually slower network. The connection starts equally fast and to compensate for this the TTFB throttling is increased.

When trying to replicate those findings on your own, make sure to clear the connection cache to get accurate results.

It uses simulated throttling by default. This works by sending unthrottled requests to the website and then simulating what the metrics would have been on a slower connection.

In contrast, DevTools throttling is a type of applied throttling where the page actually loads more slowly. It's generally more accurate than simulated throttling.

To run Lighthouse with DevTools throttling, open the advanced settings in the DevTools Lighthouse tab and uncheck Simulated throttling.

Packet-level throttling slows each individual network round trip at the operating system level. It's more accurate than both simulated throttling and DevTools throttling.

However, it can also be hard to set up as it requires admin rights and affects all programs running on your computer. 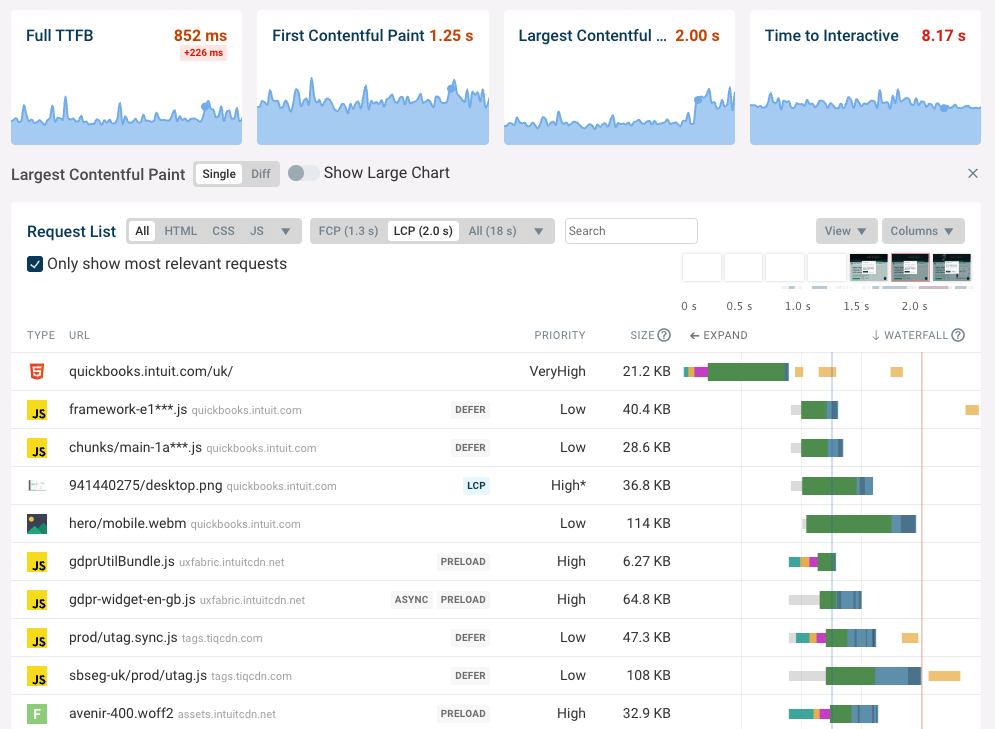