Render blocking websites can slow down your website and increase Core Web Vitals metrics like the Largest Contentful Paint.

This article explains the performance impact of render blocking resources and what you can do to solve these issues.

What are render blocking resources?​

Browsers load a large number of resources when loading a web page, for example CSS files or images. If a resource is render blocking then the browser doesn't start showing page content until that resource has finished loading.

JavaScript and CSS files can be render blocking.

The screenshot below shows a rendering filmstrip and request waterfall for a website. While the request for the HTML document finishes after 600 milliseconds, the browser still shows a blank page at that point.

The browser only starts rendering the page once three additional resources have finished loading:

How much a render blocking resource impacts page speed depends on a few factors:

As LCP is a Core Web Vitals metric, having too many render blocking resources can hurt your Google rankings.

However, if you delay loading resources until later that could also cause layout shift when the resource is finally loaded.

What are render-blocking request chains?​

In this example the render blocking CSS file is loaded after 400 milliseconds. But that CSS file uses @import to reference another CSS file. This file also needs to be downloaded before the page renders after 700 milliseconds.

The longer these chains are the bigger the performance impact will be. 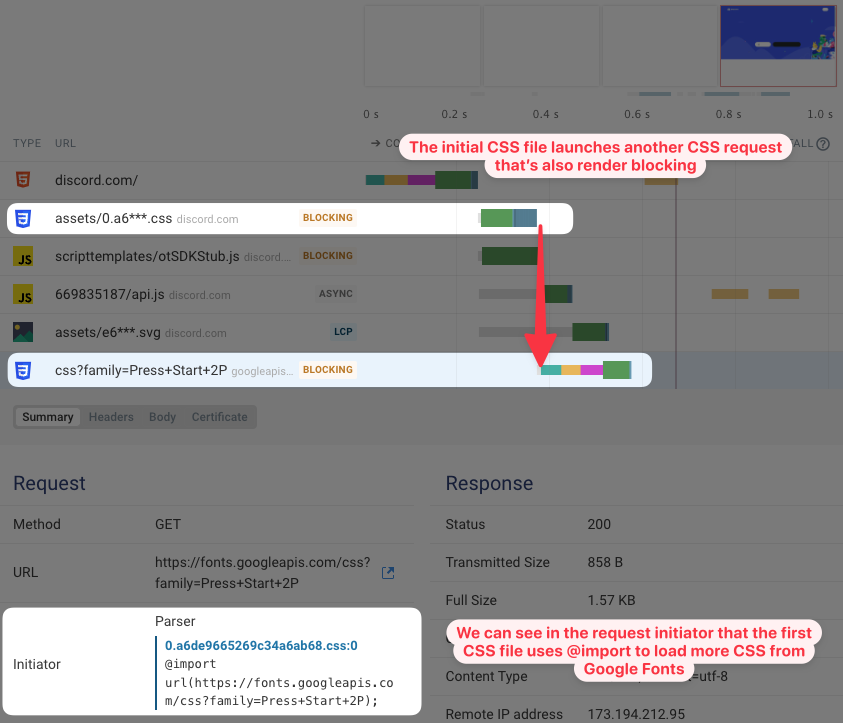 Notably, the second CSS also requires a new server connection to be established to fonts.googleapis.com. Because of this the request will take longer than if another resource from discord.com had been loaded.

What does parser blocking mean?​

Scripts and stylesheets referenced in the head always block all rendering (at least if they are loaded synchronously). These are called initial render blocking.

But what about resources referenced in the body? Chrome marks those as in_body_parser_blocking. Whether they block render depends on where in the body they appear.

How to identify render-blocking resources​

Many articles say that JavaScript and CSS files in the head are render blocking. That's a good heuristic but that's not always the case (for example if the async attribute is used, as we'll see later on in this article).

We've already seen how DebugBear highlights render blocking requests. We use the data that Chrome provides in the ResourceSendRequest trace event. 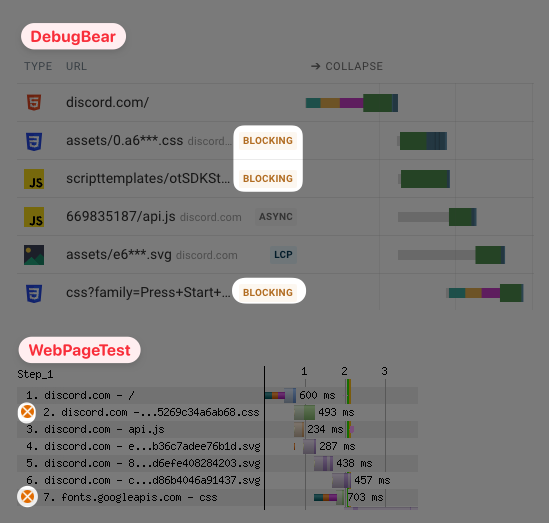 However, this doesn't use the Chrome data and can sometimes miss render blocking files. For example, in the Discord example the Google Fonts CSS is incorrectly not shown as render blocking.

How to eliminate render blocking resources​

What you need to do to remove a render blocking request depends on the type of resource that's being loaded.

You might need to change script tags to load asynchronously or inline critical CSS.

By default, the browser goes through the document from top to bottom. JavaScript code is run synchronously one script after the other.

For example, in this case the browser will first run chat.js and then analytics.js. The h1 tag is only shown after running the scripts.

However, many scripts don't need to be render blocking and can be run asynchronously. You can achieve that using the async attribute.

Now the browser will still start loading the JavaScript files as soon as possible, and run them as soon as they are downloaded. But in the meantime, rendering the h1 will no longer be blocked.

Also, if analytics.js finishes loading before chat.js, then analytics.js will run without first waiting for the chat widget code. If you want to maintain the order of execution you can use the defer attribute, which defers JavaScript execution until after the HTML document has been fully parsed by the browser.

This waterfall chart demonstrates the impact that async and defer have on page load behavior. 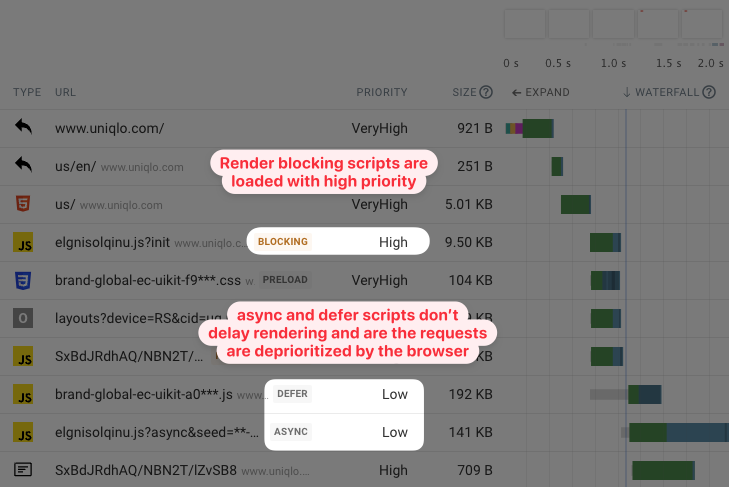 While loading key CSS files asynchronously is not an option, loading stylesheets for third party code can be more viable, for example if you have a third party widget that's only used further down on the page. In that case updating the styling later on is acceptable. Another candidate for asynchronous CSS loading would be a stylesheet that only loads font references but does not affect the page layout.

Let's say you have this stylesheet in your HTML:

This way widget.css will block rendering. To load the stylesheet asynchronously you can initially set the media attribute to print. Then, when the CSS file has loaded, you change it to all to apply the styles to the page.

Another way to remove render blocking CSS files is to embed the styles directly in the HTML document. This will increase the size of the HTML, but it can be a great solution for small CSS files under 10 KB.

Here's an example website where render blocking CSS is inlined into the page HTML. The page renders immediately after the document is loaded.

When we look at the page HTML we see a large inline style tag. 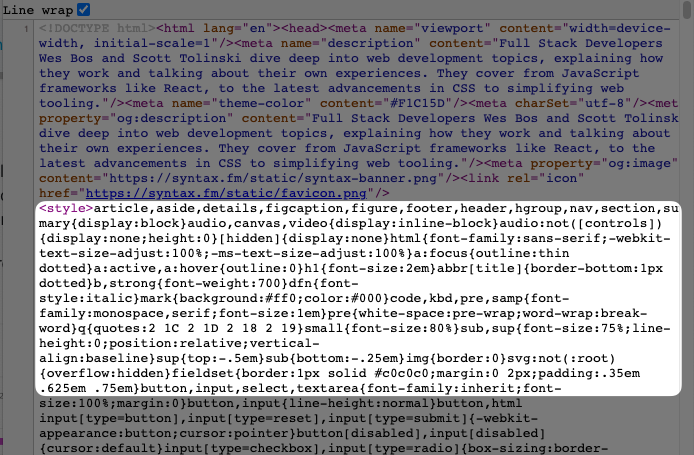 The downside of this approach is that the CSS has to be downloaded again with every HTML request, while a separate CSS file could have been in a cache. How bad this is depends on the amount of CSS being inlined.

How to reduce the performance impact of render blocking resources​

Often not all render blocking resources can be eliminated. But you can still reduce the impact they have on performance.

There are a few ways to reduce file size:

The Chrome DevTools Coverage tab can help you identify and remove unused CSS and JavaScript code on your page.

Network connections can only provide a limited amount of bandwidth, so check if other resources are competing with the render blocking requests.

Here's an example of what resource competition looks like in a waterfall chart. The c4***.svg image is quite small, only 21 kilobytes. But the browser is allocating bandwidth to the JavaScript file below it, loading over 2 megabytes of data. So the SVG only finishes loading once the JavaScript resource has finished loading.

Connecting to a new server requires the browser to do a DNS lookup, establish a TCP connection, and enable a secure SSL connection. Each of these steps requires at least one round trip on a network. The browser can only start making the HTTP request once the connection is established.

For example, the Substack website is located on substack.com but then loads additional render blocking resources from sentry-cdn.com and substackcdn.com.

In contrast, the gov.uk website loads all resources from gov.uk and can therefore reuse the existing server connection.

We saw this briefly earlier on in this article when we looked at how to identify render blocking files. The Discord homepage used @import to load a stylesheet from Google Fonts.

The browser first needs to load the Discord stylesheet to discover the Google Fonts file. We can use a preload resource hint to help the browser discover the resource sooner.

Adding this hint in the document HTML means the browser will start loading it without first waiting for the Discord CSS file.

This waterfall shows the page requests without the preload and then with the preload. After adding the preload the start time of the fonts CSS requests shifts to the left.

This waterfall shows an example where script.js synchronously adds jquery-3.6.0.js to the page and thus delays rendering. 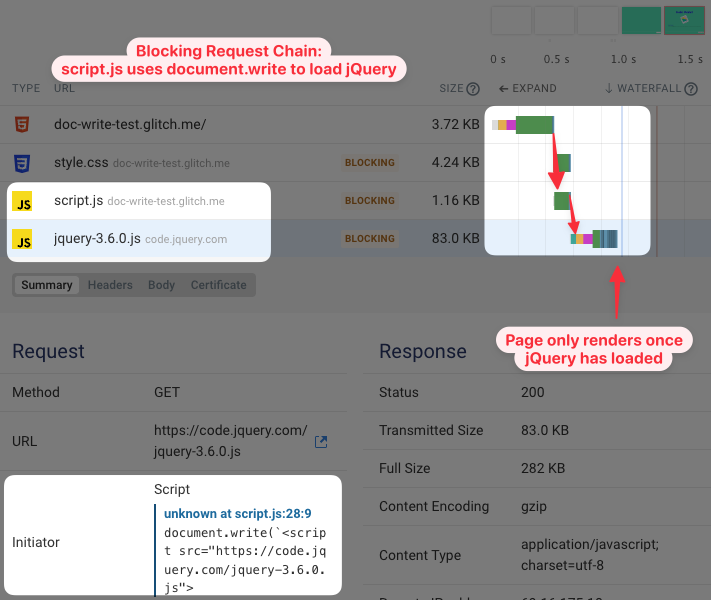 Again, this could be fixed by using a preload hint. Putting the script tag directly into the document HTML instead of using document.write would also address the issue.

The HTML document is at least partially render blocking, as the browser can't show the page without knowing what its contents are. To find that out the web server needs to start sending the HTML code to the client.

However, browsers use streaming parsers that start processing the HTML as soon as it comes in, rather than waiting until the full document has been downloaded. Therefore, pages can start rendering before the document has finished loading.

This example shows that the other resources referenced in the HTML document start downloading before the HTML request has completed.

In this case we don't see the page rendering before the completion of the document request though. That's because downloading the page HTML is a high priority task for the browser, so the other render blocking resources have to compete with that. Due to the focus on loading the HTML, loading the CSS and JavaScript code for the page only happens after the HTML download is complete.

Waiting for web fonts can slow down your First Contentful Paint if no other content is rendered on the page. If your text is still hidden but an image has rendered somewhere on the page then web fonts won't make your FCP worse.

The Largest Contentful Paint will be impacted if the LCP element is a text node using a web font. 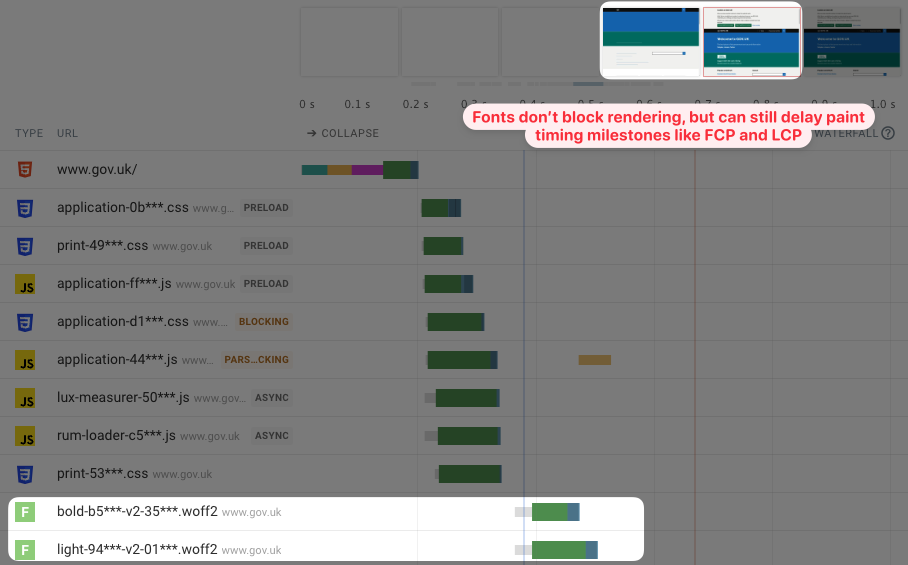 Images are not render blocking. They can delay metrics like the Largest Contentful Paint, but the rest of the page will still render fine even if the browser is still downloading an image file.

Why isn't my page rendering after all render blocking resources have loaded?​

Sometimes the request waterfall suggests that all render blocking requests have finished, but the filmstrip will still show a blank page. This can have a few reasons.

Some A/B testing tools set the body opacity to 0 to avoid flicker, delaying when the page renders.

Some sites are pure single page apps with no server rendered content. In those case, even if rendering isn't blocked, there isn't any content to render until the JavaScript application has been loaded and run.

To fix this, consider rendering a header on the backend or at least embedding a loading spinner in the page HTML to indicate the browser is waiting for the JavaScript app to load.

As mentioned above, synchronous scripts or stylesheets in the body block all rendering of content below that tag. This isn't a problem if the tags are placed at the end of the body tag, but if they appear before important content then rendering will be delayed.

DebugBear can help you detect render blocking resources, optimize your site speed, and monitor Core Web Vitals and other performance metrics over time.

Once you've reviewed your metrics you can investigate test results in depth. Start a free trial today.