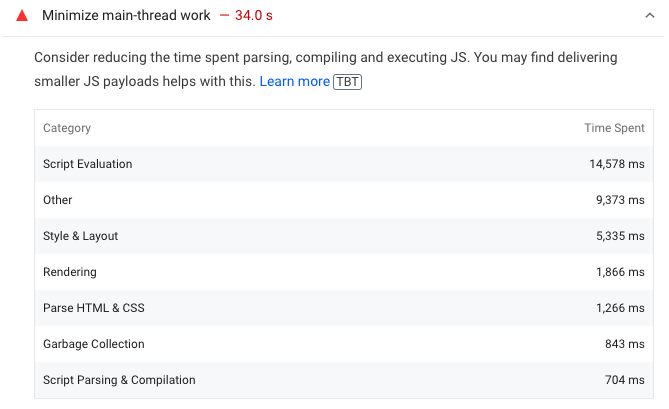 What is main thread work?​

Computers divide work into different processes and threads that mostly run independently from each other. This also lets them take advantage of multiple CPU cores and split work between them.

When rendering a web page most of the work usually happens in the main thread. For example, this is where the page layout is calculated and where the different elements on the page are painted. By default, JavaScript also runs on the main thread, and user input is handled there.

Minimizing main thread work is important as the page can't respond to user input if the event handler code is blocked by other work. These performance problems are reflected in metrics like Total Blocking Time and First Input Delay.

A high amount of main thread work can also indicate that it takes a long time for the page to be fully rendered. For example, rendering a single page app (SPA) often requires a lot of time running JavaScript on the browser main thread.

However, not all work is done on the main thread. For example, these tasks might be done in separate threads:

Work that's done off the main thread usually has a lower performance impact.

Do you need to minimize main thread work?​

Before beginning to optimize, keep in mind that main thread work does not directly impact user experience. For example, Lighthouse shows it as a Diagnostic metric, but it doesn't impact the overall Performance score. Instead of looking only at main thread work, check user-centric metrics like the Core Web Vitals to see how these CPU tasks affect your site performance.

Two seconds of work done before the initial render of the page will significantly slow down your website. But if a chat widget loads five seconds after all other content is visible, that will have a much smaller impact on your users.

How to minimize main thread work​

JavaScript apps (e.g. using React or Angular) often consist of large amounts of custom code as well as many different libraries. Compiling and running this code can take a lot of time. You can reduce this by removing unused code and splitting your JavaScript app into separate bundles that can be loaded independently.

Note that with server-side rendering the page is rendered before the client-side app initializes. This way the amount of main thread work is the same, but the user impact is much lower as the page content becomes immediately visible.

Many websites pull in resources from a variety of different providers, for example to show ads or a chat widget. Unlike with first-party code, you can't fix performance issues arising from these scripts yourself. Try contacting the customer support of the provider to see if they can help.

If that doesn't work, you have two options:

You should also ensure that third-party code isn't render-blocking, to reduce the performance impact on the user experience.

Chrome DevTools lets you see exactly what happens on the main thread, so you can identify what CPU activity can be avoided.

Start by opening DevTools, selecting the Performance tab, and collecting a performance profile.

The performance recording can be really complex, but we'll quickly narrow it down so we only need to look at main thread tasks. 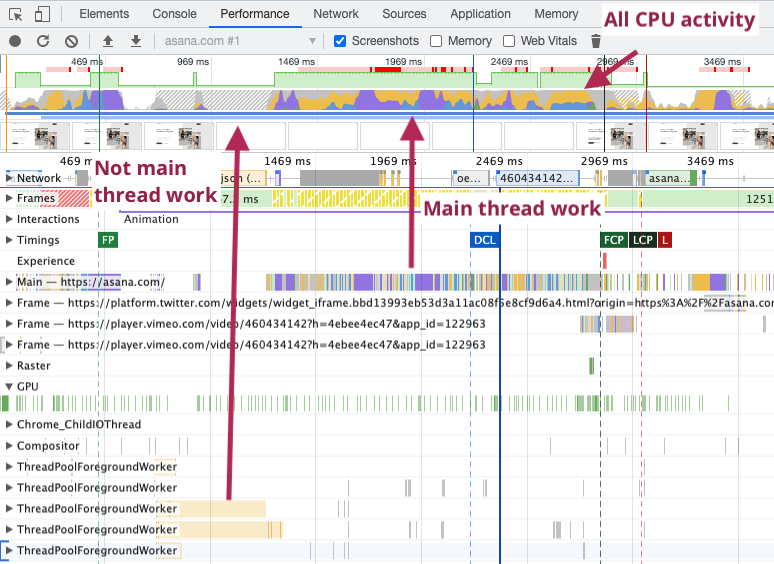 At the top of the recording we see all CPU activity. If Chrome shows a background with diagonal stripes the CPU task happened off the main thread. For example, in this recording there's a worker task that parses and compiled JavaScript code.

Main thread tasks are shown with a solid background. A different color is used for each type of CPU task, for example rendering the page or running JavaScript.

You can click on each lane in the performance recording to view more details. The blue bracket on the left indicates what lane is selected. After selecting the main thread lane DevTools shows an overall breakdown of main thread CPU activity on the page. 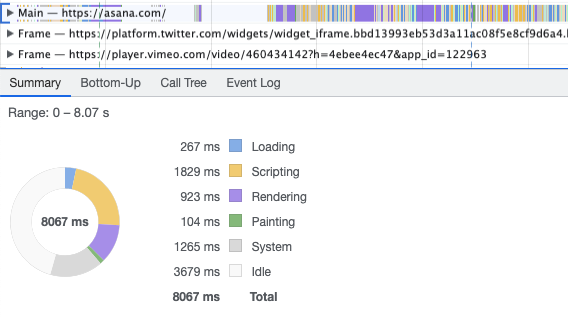 We can also select the Bottom-up view and group activity by domain in order to see whether our own code or third-party code is responsible for the CPU activity.

In this case the cookielaw.org domain also contributes to CPU activity, as well as several Chrome extensions that I've installed. 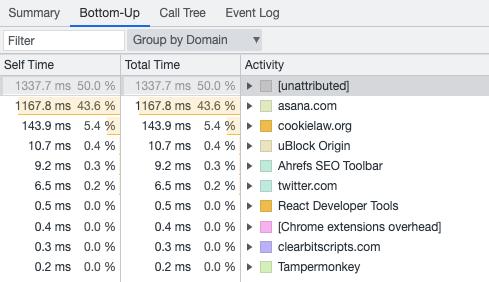 Click the arrow icon to expand each lane. For the main thread, this shows us a call stack with all the bits of code involved. Here we're looking at a public website with minified source code, so we get meaningless function names like y and c.O. For your own website, you or a developer you're working with can run a test without minification, which will be easier to interpret. 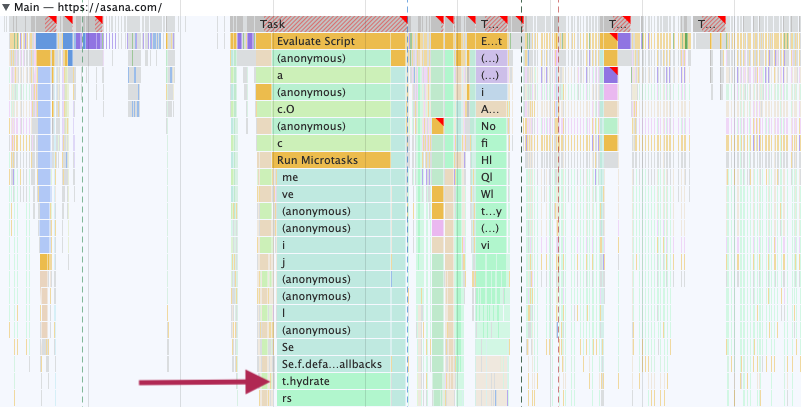 Despite the minified code we can see that a lot of work is done in a function called t.hydrate. This indicates that the page contains a client-side app that was pre-rendered on the server, and is then transformed from static HTML to an interactive app ("hydrated").

Zooming in shows that part of the hydration process involves repeated style recalculations (in purple). This is usually something to avoid, as work ends up being duplicated. 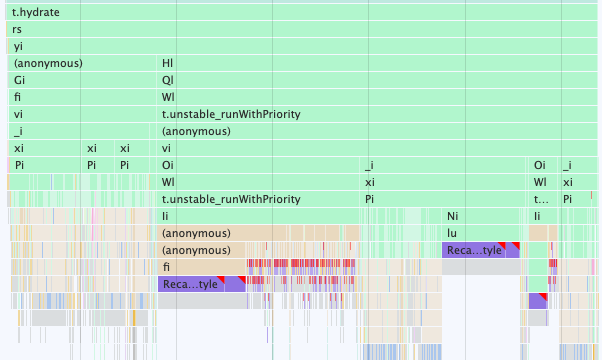 Let's look at the next big chunk of CPU work. After clicking on one of the CPU tasks, Chrome shows a breakdown of CPU activity for that task, as well as the URL that it's attributable to. In this case that's the OneTrust Banner SDK. 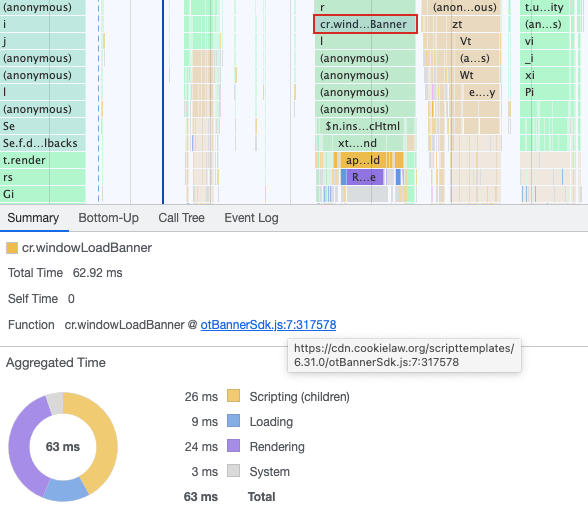 Read this article for an in-depth guide on how to profile your website using the Chrome DevTools Performance tab.

Google's Lighthouse tool, which also powers the PageSpeed Insights lab data, can give you a breakdown of main thread work by activity type. Long chunks of CPU activity will increase the Total Blocking Time metric. 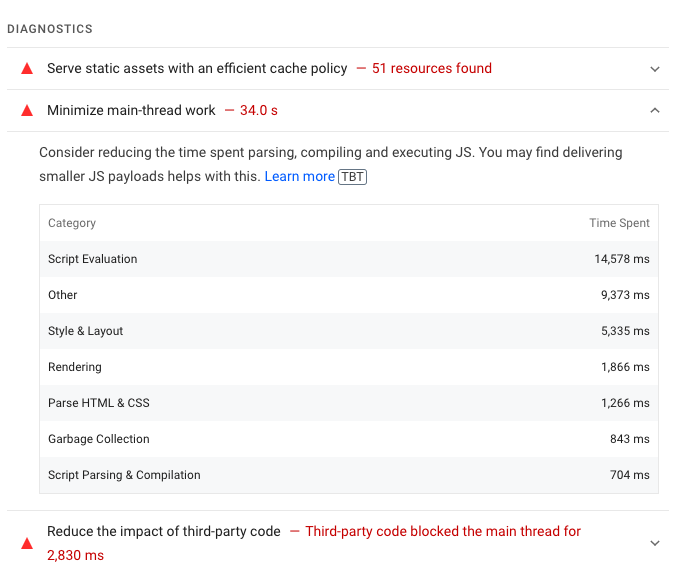 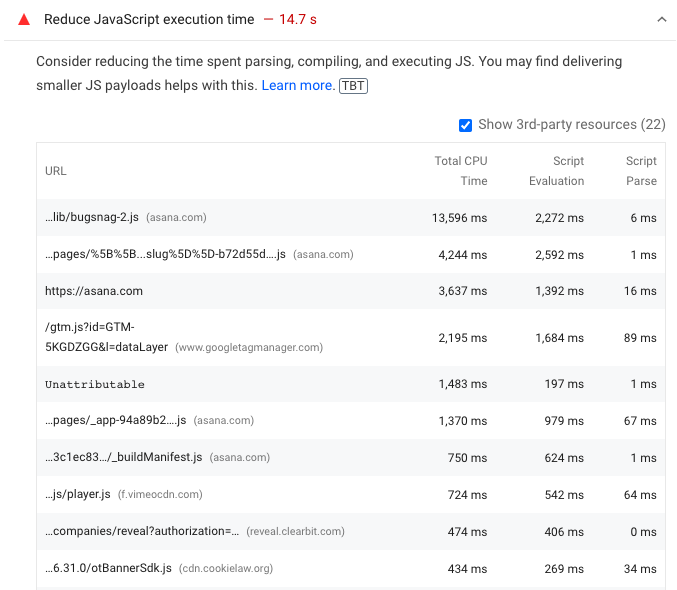 Finally, Lighthouse can identify third party code that's used on your website. The "Reduce the impact of third-party code" shows what third parties were detected and how big their impact was. If a third-party JavaScript file has a big impact on performance you can reconsider whether it's worth the cost. 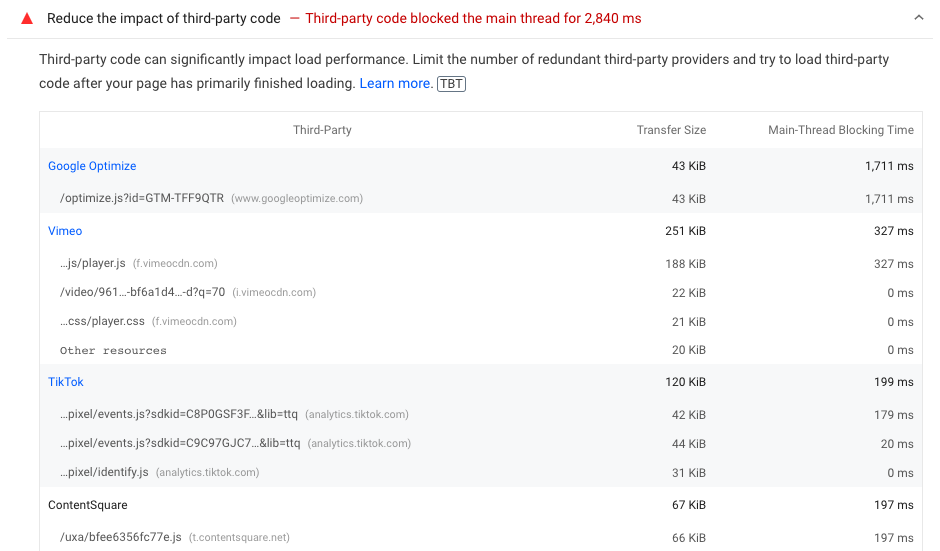 DebugBear can track CPU activity over time and alert you when there's a regression. Each test result also includes a full Lighthouse report. 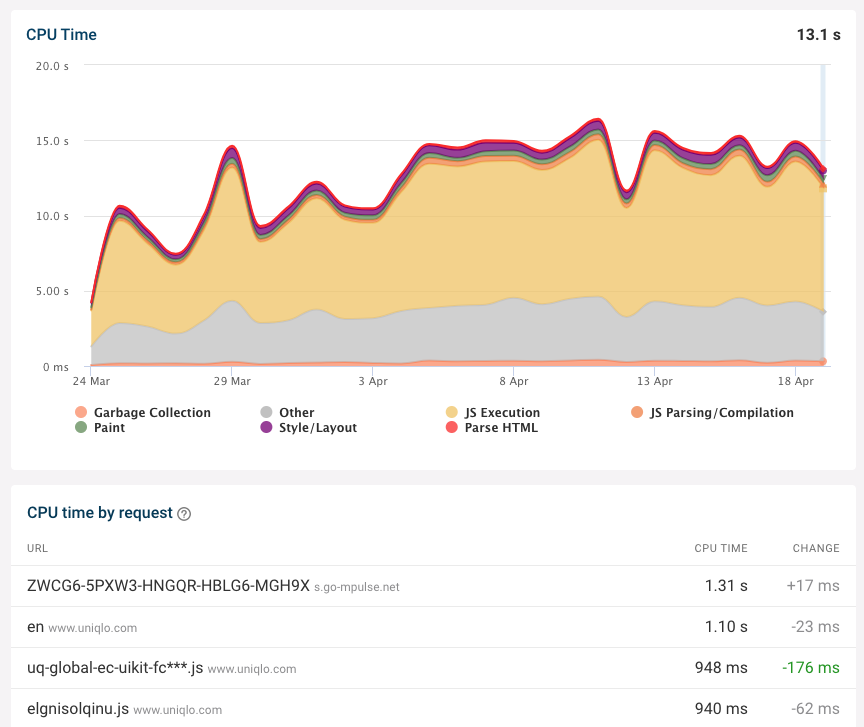 DebugBear also monitors the high-level performance metrics for your website.

What are the different CPU activity categories used in Lighthouse?​

You may see a large amount of "Other" activity for a visually complex page. Many web performance testing environments don't have a GPU, so additional CPU work is required instead.