This article explains common test errors. Feel free to contact support if you need help with an error you see on DebugBear.

DebugBear built on top of Lighthouse, so many of these errors will match Lighthouse ones. 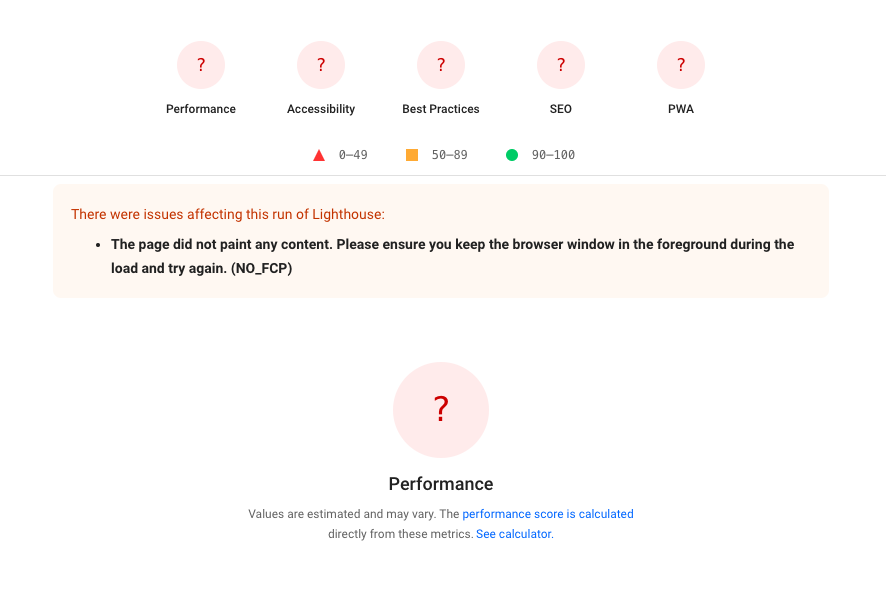 Chrome was unable to load the website. Check the test screenshot to see the exact error message.

Resolving the domain name to an IP address failed. Make sure you're not testing a website that's only available on your internal company network.

No response was received when talking to Chrome. This can happen for different reasons.

For example, this happens if no response was received to the document request. The error does not indicate an HTTP error response – rather it indicates the absence of a response.

Protocol timeouts can also occur when specific data gathering steps take a long time. Some Lighthouse audits run JavaScript code on the page, for example to gather data on all links. If your page contains 10,000 links then the page main thread might end up blocked and the command will time out.

The request for the HTML document failed with an error code. For example, the website server might have response with a 404 Not Found or 403 Forbidden response.

If you get an 403 error, make sure that your server isn't blocking the DebugBear test agent. Set up static IP addresses and allowlist them in your server configuration.

Sometimes you will see test result data despite this test error being shown. That usually means that an error code was returned for some but not all document requests. When running a Lighthouse test the page is loaded multiple times (multiple "passes").

Some reasons for this could be:

Speed Index looks at rendering snapshots and evaluates how much of the page has rendered. If no content is rendered a SPEEDINDEX_OF_ZERO is returned.

This can also happen if content is initially rendered but then disappears.

Chrome can only capture up to 450 filmstrip snapshots. For most sites this is plenty, but if your pages takes more than 10 seconds to load and shows a video or animation throughout this time then Chrome will eventually stop collecting snapshots.

If you need a full filmstrip you can inject a script that disables the animation.